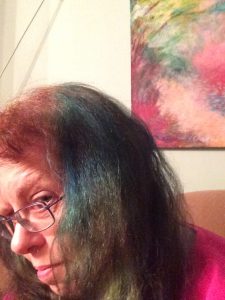 Sandi Leibowitz writes fantasy fiction and poetry, often based on myths and fairy tales. Author of the poetry collections Eurydice Sings and Elgin-nominated The Bone-Joiner, her speculative poems have garnered second- and third-place Dwarf Star awards and been nominated for the Pushcart Prize, Rhysling and Best of the Net awards. Her poems and stories for children appear in Cricket, Highlights, Ember, Spellbound, Orbit and other magazines; Her picture book for older children, Magotu and the Leopard, illustrated by Christiane Krömer, has been published by Library for All. Sandi is the founder and editor of Sycorax Press, a small press devoted to speculative poetry.

Born in Manhattan and raised in Astoria (Queens’ “Little Athens”), Sandi studied Voice at La Guardia High School of Music and Art in Harlem, afterwards earning a B.A. in English from Vassar College, an M.A. in English from NYU, post-baccalaureate certification in teaching from William Paterson, and an M.L.I.S. from Rutgers.  She’s pounded keys in a typing pool, proof-read for a medical magazine, planned galas behind the caribou diorama at the Museum of Natural History, ghost-written grant proposals for a monsignor, and currently hooks kids on books as an elementary-school librarian.

She’s performed with numerous choruses, created and directed an all women’s madrigal group, co-founded the early music ensemble Choraulos, in which she sang and played recorders, psaltery, and other instruments, studied early opera and Baroque gesture with the New York Continuo Collective, and romped onstage with New York Revels. She currently sings with the Astoria Choir and NY Festival Singers.